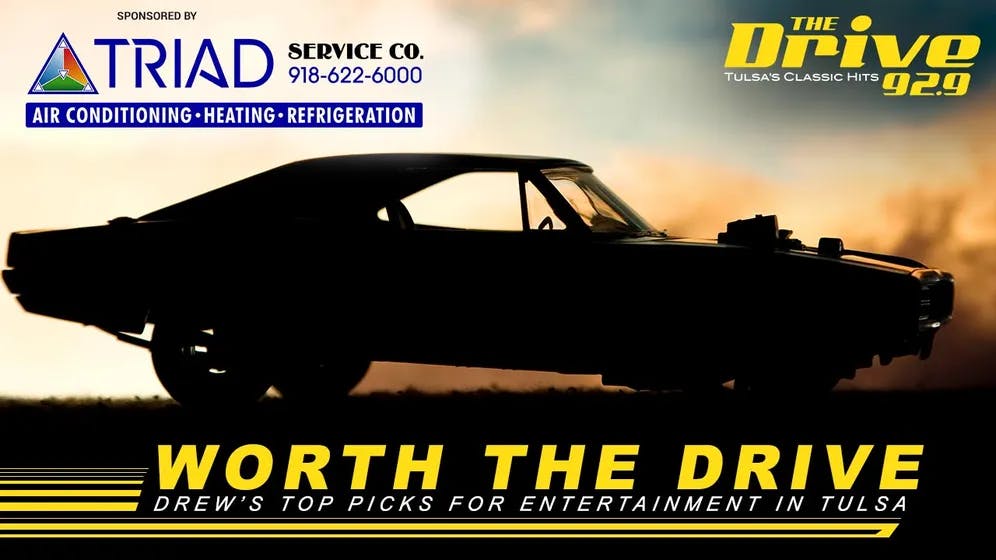 Thursday and Friday: Show your support for our TPD officers Johnson and Zarkshan ( Tulsa Police Chief Wendell Franklin delivered the heartbreaking news yesterday that Sgt Craig Johnson has died. Johnson was one of two officers shot in the line of duty Monday morning. Chief Franklin says Sgt Johnson leaves behind a wife, two sons, and his parents.)

What: Show Your Support for Sergeant Johnson and Officer Zarkeshan

Who: Tulsa Fraternal Order of Police

So many have asked how to show support during this incredibly difficult time. Please stop by the Mingo Valley Division starting this evening. There will be a dedicated patrol car parked outside where you can leave messages and tokens of support for the family of Sergeant Johnson, and Officer Zarkeshan.

Curtis The Mentalist "tinkers with your thinker" and helps us celebrate Independence Day with his hilarious and mind-blowing show "The Mastermind Show."

Dive-In Movies at Hyatt Regency Tulsa 8:30pm-10pm, (Friday & Saturday) TAKE A STAYCATION! Spend your day exploring Tulsa at Gathering Place, Tulsa’s riverfront park which features various adventure playgrounds, a boathouse, splash playground, sports court, Skate Park and more! Or visit the Oklahoma Aquarium which houses some of our aquatic friends from right here in Oklahoma, and fish from around the world. In the evenings, on Friday and Saturday, guests of the Hyatt Regency Tulsa can join us at the pool for complimentary movies & snacks, and poolside delivery from the Daily Grill. Room rates start at $79 per night and include complimentary parking, movies, free snacks during the movies, and spacious rooms with free WiFi and modern amenities.

Pink Floyd will be streaming full live concerts for free during lockdown. You can watch on the band's YouTube channel and things get under way with a newly restored version of Pulse at 5pm (BST) on Friday, April 17th. Watch Pink Floyd Pulse on YouTube

Radiohead will be posting weekly classic concert videos to their YouTube channel on Thursdays at 10pm BST (5pm ET). And you can watch them back at your leisure. View the concerts via the Radiohead channel on YouTube

Free West End and Broadway musicals? Sounds good to us. Andrew Lloyd Webber will be streaming his musicals for free online in a new series entitled "The Shows Must Go On". Shows are live on Fridays at 7pm and available for 48 hours, with a new show every week. This week it's Phantom of the Opera. View The Shows Must Go On YouTube channel

The National Theatre has announced #NationalTheatreAtHome, which will see some of the best British theatre delivered at 7pm (BST) every Thursday on YouTube. It began with James Corden in One Man Two Guvnors on 2nd April. Watch National Theatre At Home on YouTube

Sadler's Wells is offering full-length dance performances and workshops online. The programme broadcasts every Friday at 7.30pm (BST) and you will be able to watch performances back for seven days via the company's Facebook page. Watch Sadler's Wells Facebook Premieres

Chad Smith’s Drum Covers When: Daily Where: Instagram Each day, Red Hot Chili Peppers’ Chad Smith posts a video of himself drumming along to a classic song.

Grateful Dead Shakedown Stream: Enjoy a live screening of the classic Truckin' Up To Buffalo show from July 4, 1989.The show kicks off with a live Q&A with Dead archivist David Lemieux and historian Gary Lambert before the show. Tune in each Friday on the Grateful Dead's  YouTube channel for more shows accompanied by Q&As with members of the Dead community.

Americana singer/songwriter Steve Wariner will go live every Wednesday with #WarinerWednesday at 7 p.m. CST on his Facebook page.

Join the Quarantined Cabaret on Facebook! Watch performances from ALL OVER THE WORLD!

Metallica announced #MetallicaMondays every Monday at 8 p.m. EST, when they will be sharing some of their best performances. Watch HERE!

Virtually Visit The White House: Hang out in the Oval Office? Don't mind if we do! By the way, the online exhibit sections of Google Arts & Culture's offerings are like having your own personal tour guide. Our suggestion: The Virtual Tour of the Eisenhower Executive Office Building will get you acquainted with stunning spaces you've only ever seen on TV.

These close-up looks at famous paintings are so intense, you may think a docent will start yelling at you. Few paintings are suited to such a treatment than the bold, textured lines of The Starry Night.

The Tate has launched free online film tours of major exhibitions. A virtual tour of Andy Warhol's exhibition led by Director of Tate's Collection of International Art, Gregor Muir, was uploaded to their YouTube channel.

Take in 278 masterpieces here. Our suggestions: Vincent Van Gogh's self portrait, and Éduoard Manet's legendary nude, "Olympia." Don't worry about clicking aimlessly, all the pieces have extensive descriptions and notations.

View online exhibits and more than 42,000 works here. Our suggestion: A selection of fashion watercolors from the Index of American Design.

Take a virtual walk through Florence's artistic gem before stopping to admire some of the museum's most famous inhabitants. Our suggestion: Sandro Botticelli's "Birth of Venus," of course. But also, in the tour, don't forget to drag the screen and look up at the beautiful frescoes on the ceiling, painted by Alessandro Allori.

Browse more than 500 works from Africa's largest art gallery. Our suggestion: The museum houses plenty of works form Dutch and other European artists, but it also offers an array of works from South African artists. For a more historical angle, browse their online exhibit about the role of photography and resistance in the era of Apartheid.

The intimate nature of portraiture makes this museum a particularly great option for a home browse. Our suggestion: Now's the time to take a closer look at the Obama portraits everyone raves about.

After a 6-year digitization project, more than 75,000 works from the gallery's collection are available online. Also on offer are free curator-led virtual exhibition tours, which are added to regularly. This weekend visit 'KAWS: Companionship in the Age of Loneliness' (from Saturday March 21), and 'Keith Haring | Jean-Michel Basquiat: Crossing Lines' (as of Saturday March 28).